History of the Britain-Burma Society 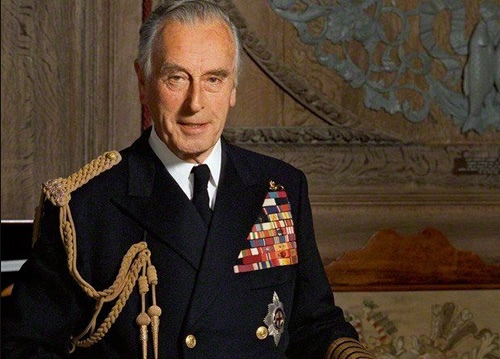 In October 2007 we celebrated 50 years of the existence of our society, which was created at a lunch at the House of Commons in October 1957. A group of people whose lives were closely linked with Burma including Lord Louis Mountbatten of Burma were organized by a formidable woman, Dorothy Woodman, into forming a new society to foster friendship and understanding between the peoples of Britain and Burma.

Together with Sir Hubert Rance, the last governor of British Burma, she was the driving force behind the society until her death in 1970. I don’t know what had led Dorothy Woodman to become interested in Burma; she first visited the country in 1947, and like so many of us, seems to have succumbed to its charms. She was present at the Independence ceremony in January 1948 when Sir Hubert Rance handed over the country to the new Burmese government. 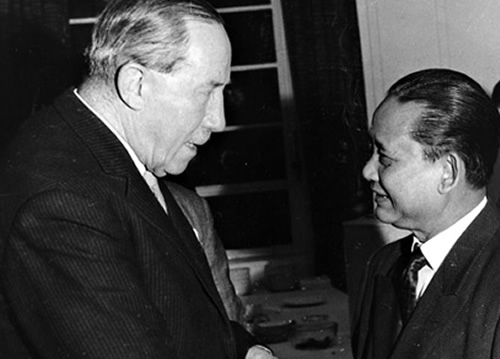 Although at that point Burma chose not to be a member of the British Commonwealth, there were still many very close ties with Great Britain, especially in training and education. It was largely to provide a welcome and ongoing friendship and support for the state scholars and trainees who were coming to Britain in considerable numbers during the 1950s and 1960s, that Dorothy Woodman founded the Society.

Earl Mountbatten of Burma was President of the Society from 1957 -1978, followed by Arthur Bottomley; Sir Hubert Rance was our first Chairman (1957-1969).

Dorothy Woodman was joint Hon. Secretary with BBC U Nay Win; and from then onwards, whoever was the current ambassador from the Union of Burma to the Court of St. James has always been as our patron.

From the start this established a pattern of British-Burmese cooperation in the running of the Society which has continued happily till today, the former providing the organisational input and the latter most of the enjoyable musical entertainment, dancing and delicious Burmese food. 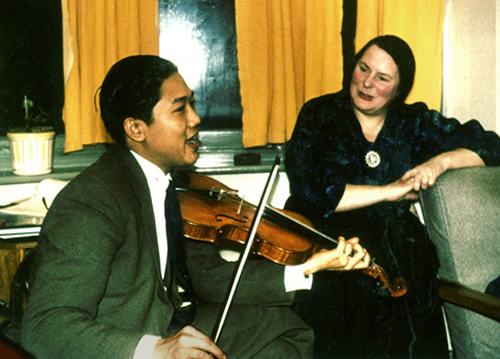 U Nay Win with Dorothy Woodman

Dorothy Woodman was a busy writer and academic, so she enlisted the help of a friend, Mrs Betty Paddon, as Honorary Meetings Secretary (from 1960-1976).

Betty and her husband Percy opened their home to all the students from Burma and are remembered with love and gratitude by many of the students from those years. They have left us a photograph album which records all the names of the students they ‘adopted’. Sad to say, the Paddons never once visited Burma before they died.

We met once a month, starting in October at the beginning of the academic year with the Welcome Pwe when the new students and trainees had just arrived. For many years we would have six lecture meetings in the year, plus a Christmas pwe in December and a New Year Thingyan pwe in April, often with Ohnno Khaukswe (Coconut noodles) and with plenty of water sprinkling. More recently we have given up the two pwes and added a lecture meeting in December.

At the beginning we used to meet in the rather grand setting of the Royal Overseas League. On one memorable occasion we had a visit from General Ne Win, with, as his guest, Dame Barbara Cartland. 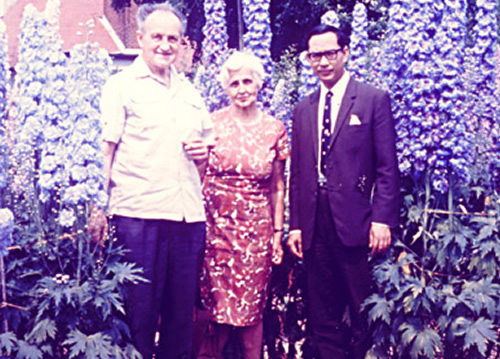 Percy and Betty Paddon, with Dr Chit Maung in 1971

In the 70s we moved to holding our pwes at the Westminster Cathedral Conference Centre and to having our lecture meetings in the comfortably elegant surroundings of the Medical Society of London, just off Cavendish Square. We are greatly privileged to be able to hold our monthly meetings (and our Council meetings) in this place thanks entirely to Professor Alan Woodruff who took over as our Chairman in 1970. He and his wife Helen’s links with Burma went back a long way as they had married in Rangoon soon after the end of the war. Helen had nursed some of the British prisoners of war after their release from Insein prison.

By 1970, Alan Woodruff already knew Gen Ne Win and his family well, after an article by Dr Woodruff had played a part in persuading the World Health Organization to give a substantial sum in medical aid to Burma at the end of the 1960s, and Dr Woodruff was asked to advise on how the aid could best be used.

Two institutions which have played and continue to play an important part in the life of the society are the Burmese section of the B.B.C. and the School of Oriental and African Studies of the University of London. In the 1970s Professor Hla Pe – the first teacher of Anna Allott and John Okell at SOAS – became the Vice Chairman until his retirement and return to Burma in 1980.

He was followed as Vice Chairman by U Khin, ex-Burma navy, a former Burmese Minister of Information who had come to live in London in the 1960s and worked in the BBC. He too, like BBC U Nay Win, played us many a merry tune on the violin. 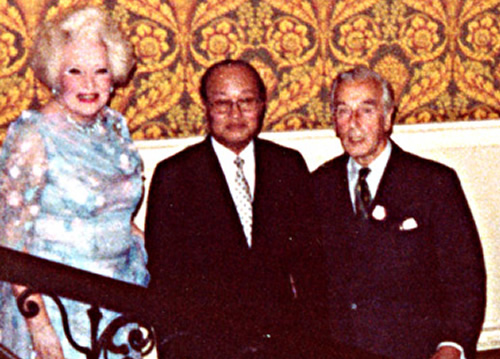 Both Anna Allott, who took over as Hon. Secretary in 1980, and U Khin and family then lived in Finchley Central where they discovered an Indian shop which made excellent vegetarian samoosas. Which is the reason why now, in 2007, the samoosas we enjoy at our lecture meetings still come in by special taxi from Finchley. U Khin passed away in December 2001, still looking far younger than his 85 years.

Our present Chairman is John Okell, only recently retired from teaching Burmese at SOAS, and our Honorary Treasurer is U Soe Min Tun, the son-in-law of U Khin.

Many of the British diplomats who are posted to Rangoon fall in love with the country – and join the Britain-Burma Society. Among them is our current President, Sir Nicholas Fenn – who was also High Commissioner to India after he left Burma.

Based on reflections by Anna Allott at the Golden Jubilee meeting of the Society – on 2nd October 2007.

Photography provided by the Britain Burma Society and R D B Lennard.